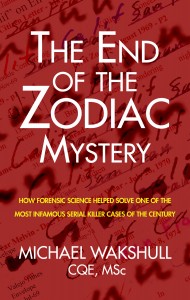 This is the story of traces left by a father, discovered 40 years later by the son he had cruelly abandoned and never knew.  These traces told the son more than he ever wanted to know about his father.

This book explains how I came to assist authors Gary L. Stewart and Susan Mustafa by adding a final layer of certainty in their search for the true identity of Gary’s father, Earl Van Best Jr. The book, The Most Dangerous Animal of All by Gary L. Stewart with Susan Mustafa, tells the chilling story of how Gary came to learn who his father really was.

We always leave traces of ourselves wherever we go. These traces contain evidence that may eventually be discovered. In 1962, Earl Van Best Jr. wrote some information on a marriage certificate. Fifty years later, this marriage certificate would be associated with the writings of a serial killer who had never been caught – until now.

By reading this book, you will gain an insider perspective of how I worked this intriguing forensic case.  You will walk step-by-step through the logic I used and the comparisons I discovered in the handwriting of this vicious killer. The information provided is not intended to substitute for the detailed report I delivered to Susan approximately two months after first speaking with her about the case. You can find that report in the Appendix.

The report is a thorough description of my research findings, and it includes copies of actual documents written by the man who called himself the Zodiac killer. I used these documents to identify him using the scientific procedures described here.

As you read this book and the report that follows, you will learn how forensic handwriting examination – the final piece of evidence in the case – was used to put an end to this macabre mystery.

Having conducted scientific research in the discipline of handwriting identification, this case presented an interesting challenge. I have been an invited speaker at international forensic conferences including the World Congress of Forensics in China, have authored legal continuing education classes in document examination and other works, and I work on criminal as well as civil cases.

Regardless of the results of the examination, I knew this would be an interesting case to cite. A document examiner colleague had worked on the case of Jack the Ripper in London, which resulted in eliminating the suspect as being the killer. The people who retained him had been certain the suspect was the killer.

My Father Was the Zodiac Killer, Author Claims – people.com

Is This Man the Zodiac Killer? His Son Says Yes – nymag.com